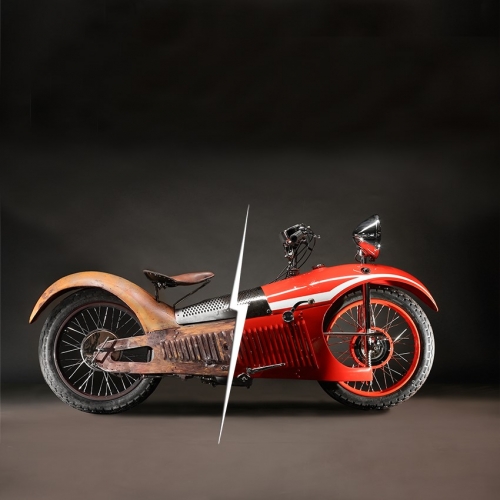 Two years ago, I acquired an obscure motorcycle from the Art Deco era of the late ’20s known as a New-Motorcycle, designed by the Frenchman George Roy.  I was equally fascinated with Roy’s background as I was by the New-Motorcycle’s pressed steel monocoque frame, a radical departure from the tubular frames of the day.  His parachuting into the world of motorcycle design seemed to parallel mine. Like me, Roy was not a “moto head” or engineer by training, but rather a corporate executive who brought a fresh (and not terribly popular) perspective to moto design. His primary focus, like mine, was to specialize in what was aesthetically appealing and different, to carve a niche that was not crowded by more pedigreed designers and more prolific producers.

After a few undistinguished years of limited production with the New-Motorcycle, Roy refined the design and created the Majestic, featuring another monocoque chassis with a gaping mouth and louvered sides that resembled more a predatory shark than it did a motorcycle.

Of the roughly 100 Majestics ever produced, perhaps only 10 survive to this day. After my acquisition of the New-Motorcycle, I set about the task of finding one of those survivors, intent on becoming perhaps the only private collector in the world to reunite both offspring of George Roy’s brief foray into cycling.  But all efforts proved futile, and the search was reluctantly abandoned.

And then I received a call from my “cher ami” Serge Bueno of Heroes Motorcycles, an uber-talented collector/designer/artist whose works already graced more than a few nooks and crannies of my Collection.  The brief conversation went something like this, with Serge speaking mostly in French and my responding mostly in English:

Bobby:  I’m fine Serge, and you?  Yes, of course, I’m familiar with the Majestic.  I’ve been searching for one for over a year.

B:  You have one!!!  I don’t care how much restoration it needs.  You’re the best restoration expert I know. Are you sure it’s authentic?

That was it.  I trusted Serge, and the find was too precious to doubt the word of one of my most cherished amis. Besides, Serge promised to tell me the whole story about the Majestic’s provenance, but only after we agreed on price for the acquisition and the four-month restoration process. The price negotiations lasted about as long as it takes a handful of emails to dash back-and-forth across cyberspace.

And then Serge shared with me the story of how this treasure had come into his hands.  The Majestic belonged to his father, an avid collector of rare European motorcycles.  Serge and M. Bueno had decided to restore the cycle as a father-son enterprise to create one of the most magnificent motorcycles in existence. So the duo deconstructed the rusting, but wholly intact, original cycle.  And then his father passed away, suddenly and unexpectedly.  The distraught son could not bring himself to continue the restoration without his father, so the deconstructed and rusting parts were stored in crates at the family estate in Normandy, France.

Over a decade later, Serge decided that the emotional wounds had healed sufficiently to ship the crates over to the States and begin the restoration process himself … but only if the Majestic could be installed in a permanent home in keeping with its rare provenance and its treasured status as a family heirloom.  And that’s why I received the call from Serge, who said that my Museum was the only place Serge considered to be a fitting home.  And that’s how the Majestic found me.